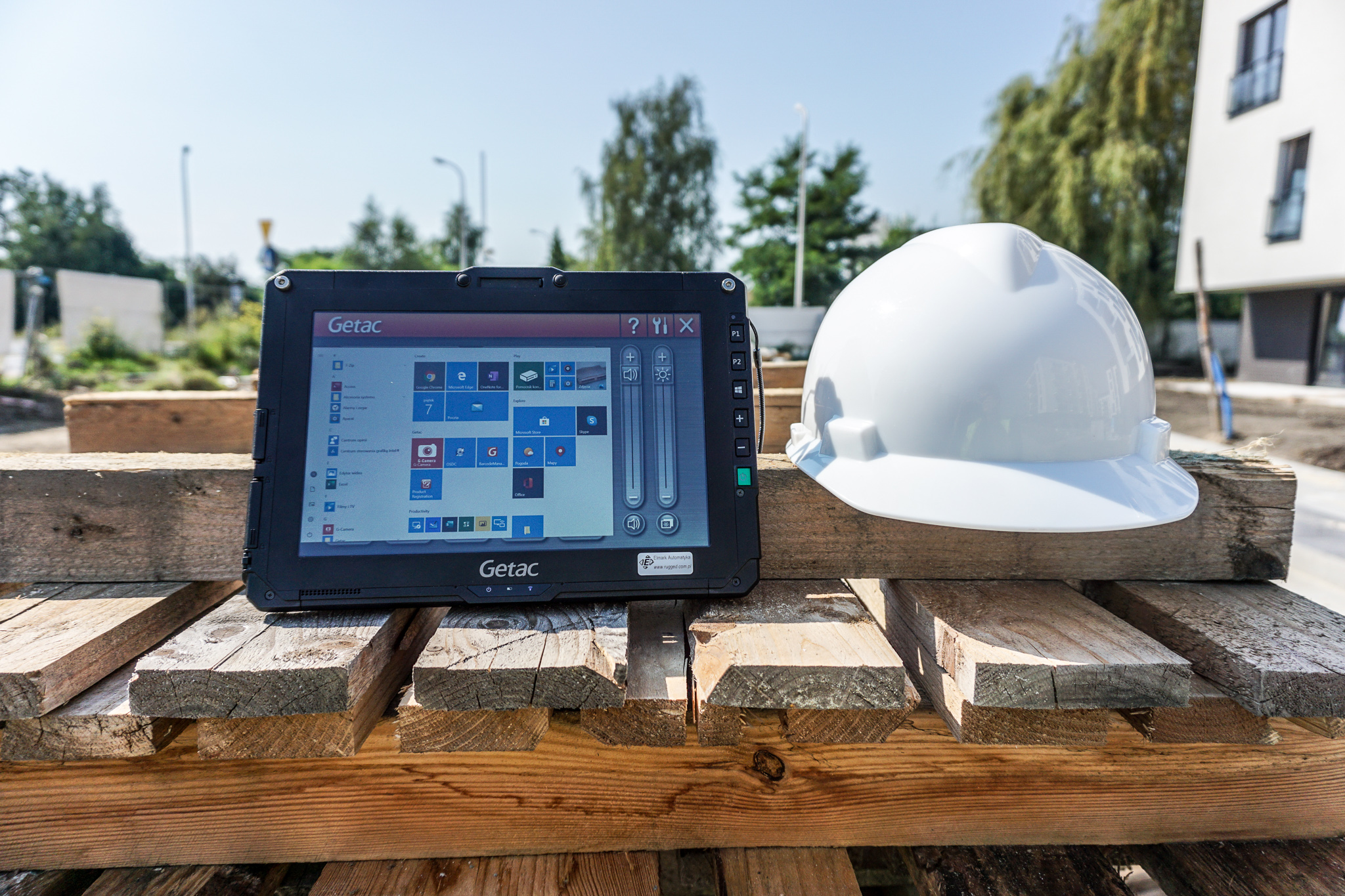 Getac is a popular manufacturer of rugged computers with specialized and industrial applications. The company provided us for testing its handy, relatively light and universal tablet with Windows 10 Pro, which I took with me to the construction site. All this to see if such hardware can replace a rugged laptop.

Specialized, rugged computers and tablets are associated with large, heavy, powerfully built beasts. For this with protruding batteries. However, Getac has been showing for some time that the new wave of devices for industry and specialists can be completely different – relatively light, easy to use, and still durable and practical. An example of such a machine is Getac UX10 – a reinforced tablet with Windows 10 Pro, which can be turned into a laptop at any time thanks to an attached keyboard.

If we combine a rugged tablet with other specialized equipment of this type, the UX10 will seem light as a feather. The low weight was achieved by Getac engineers thanks to two basic parameters. First of all, the screen size of the tablet is 10.1 inches, which makes the equipment closer to the home iPad than to other industrial screens. Secondly, instead of a large and protruding battery, a lighter version with a capacity of 4200mAh was chosen.

In addition, the reinforced housing has a hinged metal handle, thanks to which the weight of the tablet is even better distributed. When I compare it to the massive laptop I carried while studying, the difference is gigantic. Getac UX10 is lightweight and very easy to carry. You can put it practically anywhere, and also hang it, thanks to the previously mentioned handle. All you need is a larger nail protruding from the wall, a solid branch or an ordinary hanger and it’s ready.

The smaller battery does not hurt thanks to Intel’s low-voltage CPU.

Depending on the version, the UX10 tablets are equipped with the eighth generation quad-core i5 and i7 processors. The Whiskey Lake architecture works well in mobile devices, taking full advantage of energy saving modes. Thanks to the Intel processor, the idle tablet is satisfied with the energy consumption of only 2.6 W. In practice, taking into account the capacity of the battery included in the kit (4200mAh), it means 18-19 hours of readiness for operation.

Of course, during active operation of the device, the power consumption is much, much higher. However, even with maximum screen brightness and peak performance mode, the UX10 will withstand a full eight-hour shift in the workplace. If that’s not enough for us, Getac allows you to buy a larger battery with a capacity of 9240mAh. An idea worth considering is also a dedicated charging docking station, thanks to which the issue of energy loss basically ceases to exist. Great mobility, in turn, remains.

The screen makes the biggest impression. Extremely bright and suitable for outdoor use.

You come to the touch screen. You take off your gloves. You touch the display surface to check the data. Then you put your gloves on again. And so every time. Getac solves this problem. The touch display in the UX10 model can be operated with gloves and gloves. This also applies to gestures and simultaneous multi-point touch. The full capabilities of the tablet can be used by both a paramedic wearing stretchy disposable gloves, as well as an engineer in leather gloves, located at the construction site.

The screen of the UX10 tablet is also resistant to rain. Single drops not only pose no threat to electronics, but also do not affect the tactile functions. Getac’s patented technology distinguishes between touch and raindrops and drops remaining on the surface. Thanks to this, even during light rainfall, you can use the touch display without any interference. Try to achieve the same on your smartphone. Impossible.

The matte IPS matrix supported by the proprietary LumiBond2 technology was created not only for working in closed rooms, but also in the field. With a maximum brightness of 1000 nits, content is visible even in summer, strong, natural light. The screen does not reflect the surroundings, while offering good visibility angles without distorting colors or contrast. If only my iPad and Nintendo Switch were just as bright. The problem of readability in sunlight ceases to exist.

Designed to fall from a height of 1.8 meters.

Like other Getac products, the UX10 tablet also received a lot of certificates confirming its above-average durability and resistance. Let’s start with IP65, which is full protection against dust and partial protection against liquids. Rain or spilling coffee on the tablet should not be a problem. However, it is worth remembering that we are not talking about waterproof equipment, suitable for full immersion for a certain period of time.

The device received the military certificate MIL-STD-810G. This means that the tablet operates in extremely low and high temperatures, is resistant to strong shocks and vibrations, it is not damaged by dust, dust or moisture, it works in the rain, and is not disturbed by long sunlight. The distinguishing feature of the discussed model is the military certificate MIL-STD-461F, which guarantees protection against electromagnetic interference. In fact: the tablet’s components have been covered with an additional layer of alloy, which can be seen after opening the device.

For rugged laptops and tablets, the drop resistance factor is important. Getac UX10 has been enclosed in such a way to withstand an impact on the ground from a height of almost two meters. Consequently, the most common falls from a height of about 1.2 meters will be relatively safe for an industrial tablet. I limited my own endurance tests to falls on panels, from the height of the desk top. Zero traces after hitting the ground, zero detachable parts.

Make a tablet, which is a number of unique accessories in the housing.

The reinforced housing of the device hides two cameras. The front can be used for video calling or for identifying the identity using the Windows Hello function. On the back side, we will make acceptable 8MP photos of the technical documentation or employee report. There is also a stylus inside the case, which serves as another way to navigate the touchscreen. The sockets are hidden behind solidly closed, additionally rubberized plugs. Large and clear physical buttons allow you to quickly turn on / off the device, call the Windows menu, increase or decrease the variable, and also run two assigned programs. Additionally, in the Getac Utility application we can assign any function to each button. The housing also allows you to view the battery charge status, which is a very practical accessory.

The reinforced housing can be extended with a number of accessories. Getac’s offer includes such modules as a dedicated detachable physical keyboard, a rotating hand holder with a stand, a fingerprint reader, a barcode scanner, a reinforced WiFi / GPS antenna or a 4G / LTE modem. The Windows 10 tablet can be expanded with components specific to a specific type of activity or a specific industry sector. Hence the price differences, depending on the configuration, ranging from PLN 8,500 to 15,000 . This price also includes a three-year door-to-door warranty, including accidental mechanical damage as standard.

Getac UX10 on the construction site, i.e. a rugged tablet in a demanding environment.

The tested device was my companion on the construction site of one of the modern housing estates in Katowice ( Thanks to TDJ Estate, which provided the place for the photo session ). The tablet has survived basically everything: drops, dust, dust, vibrations, rain and handling with gloves. The equipment had an extremely wide range of applications. From ArCADia, through Norma PRO, ending with the internet radio (the tablet turned out to be surprisingly loud). More than once or twice, I pushed the dust off the screen, only to use the web browser a moment later.

Thanks to an efficient processor of at least 8 GB RAM and a 256 GB SSD disk, the small tablet was more than adequate for field work. The eight-hour shift is not terrible for him, and the small dimensions turned out to be a great distinguishing feature from the competition. I imagine that thanks to its handiness and mobility, such Getac would prove itself not only on a construction site or in a factory, but also in the hands of medical workers or law enforcement services. Fast, light and with a sensational display, the UX10 is an alternative to bulky, more expensive industrial laptops like the B300 or X500.

The equipment was supplied by the Polish distributor, Elmark Automatyka SA