We have seen a lot of Xiaomi smartphones and gadgets in the past but today we have probably the most interesting of them all, we are reviewing the Xiaomi Drone 4K Edition. Earlier we saw a standard Xiaomi drone with 1080p video recording capability but the users wanted more and Xiaomi as always heard it’s Mi fans, launching a 4K version with around 400 optimizations and 5 major hardware updates. This 4K edition costs 2999 Yuan. Now there are plenty of drone manufacturers available in the market and some of them have made a really good name for themselves like DJI. So is this drone by Xiaomi worth buying and stands on Xiaomi’s standard of providing great specs at affordable prices. Get the cheapest price here. We gonna find out in an in-depth review below.

The design of the 4K edition is very similar to the previous one but what sets it apart is the gold detailing. The body is made of plastic and seems very delicate but appearances can be deceptive, the drone is super tough and quite strong. The mixture of white and gold gives this drone a very classy look.

The body is just like any other drone in cross-form shape with four propellers fixed to the motors at the end of drone’s arms. We have LED lights below all four propellers with different colors for direction indication. The LED light function is similar to what we see on ships and airplanes.

Below we have the camera which appears like a huge eye and seems very powerful yet delicate. The camera mount is well built and the drone comes with 3-axis stabilization which works wonders in recording stable photoage. 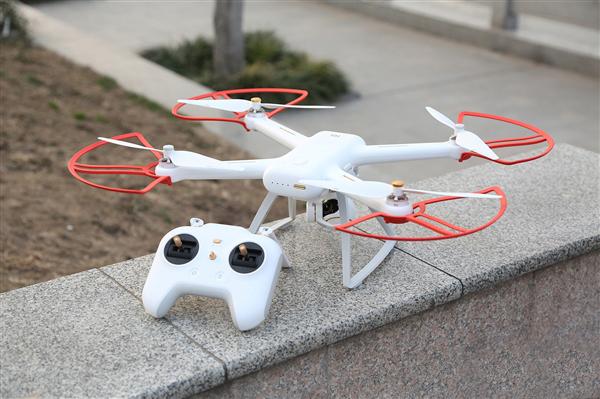 Then we have the usual landing gear or legs of the drone. These two are made of really good quality material and is shaped like a triangle. The landing legs are not fixed and can be folded with a button to make the drone more portable. The complete package is so flexible that it can fit in a backpack easily and can be taken everywhere on your shoulder.

A drone is incomplete without a compatible remote control or RC. The Xiaomi Drone 4K remote is equally good and useful as the drone itself. The aesthetics of the remote is similar to the drone, it’s a white remote with golden details. There are two antennas, a ‘return to home’ button, two levers which are quite big and gives proper grip, a power button, battery status and an automatic landing and take off button. We also have two programmable wheel button on the top. On the back of the remote are two more buttons for taking photos and recording videos. Using a support clamp, you can attach your smartphone to the remote which then serves as a screen. 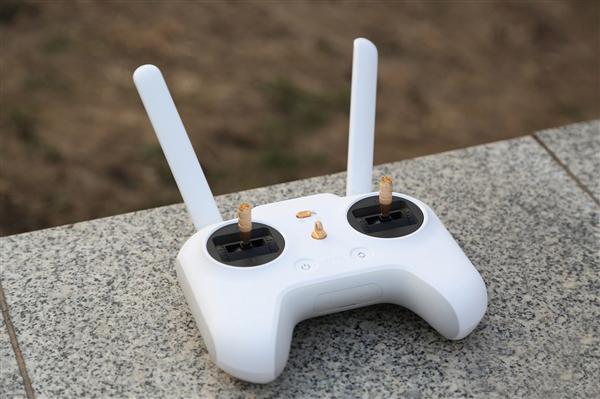 Xiaomi Drone 4K is beautiful to look at but it performs equally good. The drone comes with 5100 mAh battery which provides a flight time of 26 minutes. It supports a transmission distance to up to 4KM. The camera on this drone is 12MP Sony back-illuminated sensor, which records in 3840×2160 pixel resolution. The camera is backed by a 3-axis stabilizing system with a built-in gyroscope, accelerometer and brushless motor driver. Xiaomi has thrown in a special app to control this beast easily. The app allows you to generate routes, set up automatic takeoffs and landings along with destinations, fly around a given point, etc.

Talking about the video recording of the Xiaomi Drone 4K, the output is just amazing. It is really tough to believe the results of this drone. With 4K, the camera captures the smallest details with ease. However, making some tweaks with saturation and contrast will improve your videos, so we recommend you to keep on experimenting. We also found the gimbal a bit abnormal and a slight degree of imperfection. The horizon line doesn’t seem straight and it is a problem with most of the users. The photos too give similar impression but they are quite sharp.

Talking about other stuff, the drone produces a considerable amount of noise and we won’t say it is a quiet drone. The app built for this drone is very helpful and useful too. The app screen shows all the required information like altitude, battery, drone distance from the user, GPS status and what not. This app makes this drone experience really enjoyable and unique.

Xiaomi has taken care of the security of the drone too. The drone automatically returns when the battery is low or the drone loses GPS connection. You can also track the position of the drone in real time and the app also helps you to find no-fly zones. 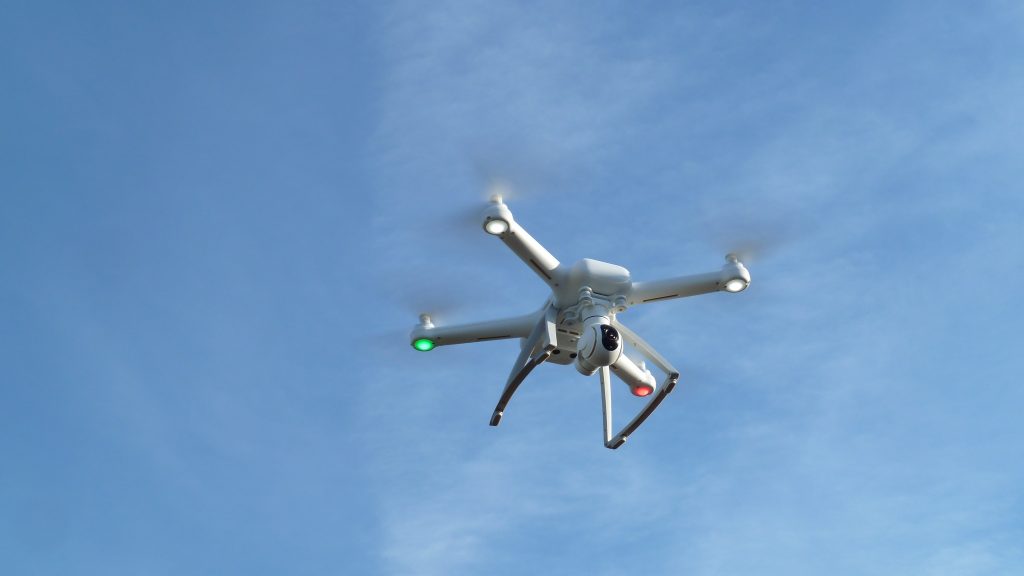 It seems whatever Xiaomi makes is a wonderful device and the same can be said for this Xiaomi Drone 4K too. Given the price, this is the best drone you can get in the market. This flying beast is suitable for all jobs and can be easily used by a rookie or a professional. The drone checks all boxes, design, functionality, usability, video recording, battery performance almost everything is perfect. Though are still some bugs we expect them to be solved in near future.

We highly recommend this product to anyone looking for a camera drone that too in 4K which is affordable and does not compromise on quality. Here is the best price you can find online.