Hisense the brand may have debuted in India just recently, but interestingly, the A71F series was here earlier under a different name. We know it as Vu’s Premium 4K series, or their Ultra 4K series. While the Hisense 55A71F is pretty much the Vu 55PM (Review) that we reviewed earlier this year in terms of design and specifications, there are a few minor changes and one big enhancement making this a very interesting proposition. So is this the perfect Smart TV one can buy in India under Rs 40,000? Let’s find out. 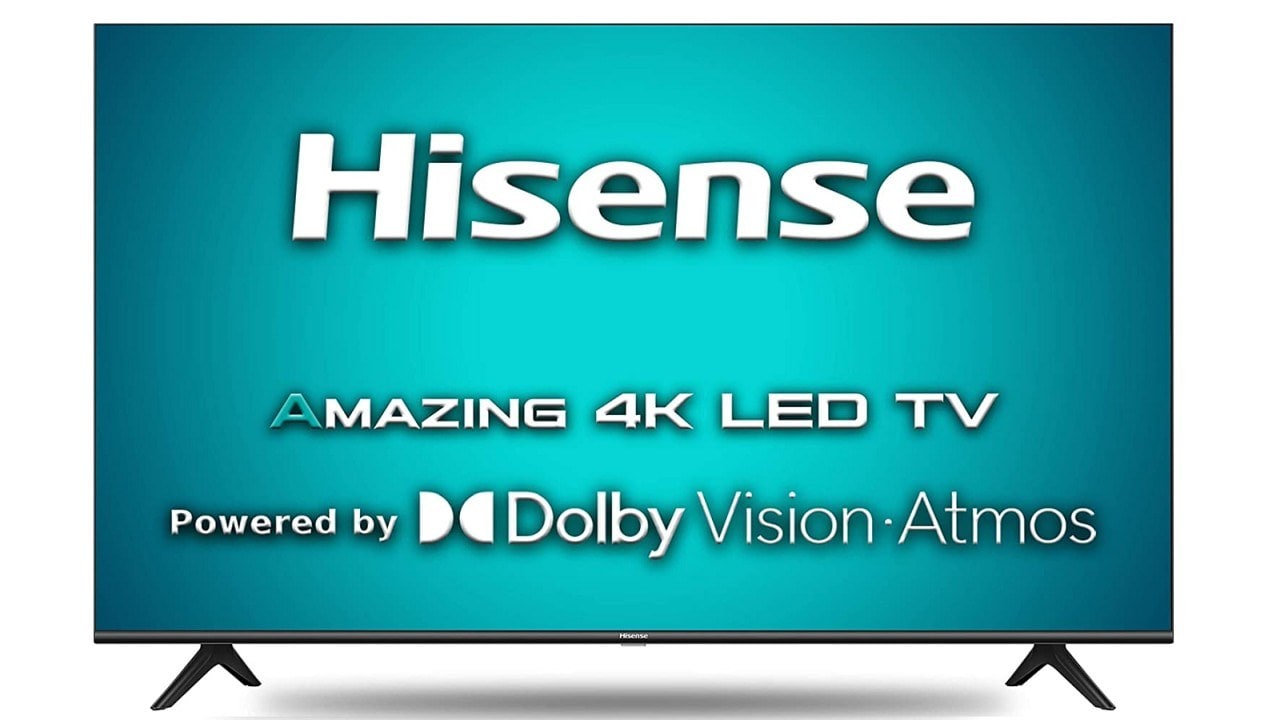 As I just mentioned, this TV looks exactly like the Vu 55PM model except for the black borders instead of grey. It has extremely slim bezels on three sides and a not-so-thick bottom bezel. The power LED and IR receiver are placed on a tiny chin below the company logo at the centre of the bottom bezel. A pair of bottom-firing speakers are neatly hidden away. The TV isn’t remotely as slim as the OnePlus TV U1 but not too bulky either. It can be wall-mounted or placed on a desk using the bundled stands. The necessary screws and mounts are provided in the package along with a wireless remote and a pair of AAA batteries.

In the connectivity department, you get three HDMI ports – one of which supports ARC, two USB 2.0 ports, optical audio, 3.5mm headphone out and a LAN port – all along the left edge of the centre module, while AV input ports are placed at the back of the TV. Just like in case of the Vu 55PM, the connectivity ports are located over a foot and a half inwards from the edge, making it quite hard to reach if you wall mount the TV. Ideally, they should have been at least 9 inches closer to the edge. Wireless connectivity options include Bluetooth 5.0 and dual-band WiFi.

The connectivity ports are located over a foot and a half inwards from the edge, making it quite hard to reach if you wall mount the TV

The Hisense 55A71F has a 55-inch VA panel with an Ultra HD (4K) resolution of 3840 x 2160 pixels and a 60 Hz refresh rate. The company hasn’t disclosed the panel brightness figures, but it is fairly bright and supports HDR10, HLG and more importantly, Dolby Vision standards for HDR content. Like all smart TVs, there is built-in WiFi, but unlike several budget TVs these days, it does support dual-band 2.4 GHz and 5 GHz WiFi networks with support for b/g/n/ac standards. Like all official Android TVs, it has Chromecast built-in and lets you cast content to the screen from compatible apps on your phone or tablet.

The specifications of this TV are quite good for the segment. It is powered by a quad-core processor with ARM Cortex A55 cores and a Mali-470 MP GPU. Each of the four CPU cores can throttle between 1100 MHz to 1400 MHz. You get 2 GB RAM and 16 GB of internal storage here, a chunk of which is taken up by the Android Pie 9.0 OS for TV. You are still left with well over 10 GB of space for your needs; much higher than what the OnePlus TV offered. Just like its Vu twin, the sound output is rated at 30 Watts RMS but with one major upgrade — this TV is compliant with Dolby Atmos audio. More on that in the audio quality section.

It comes with a full-function remote control that supports IR and Bluetooth, and looks exactly like the one that you get with several Vu Smart TVs, but with a Hisense logo. Looks like Hisense wasn’t just making panels for them as was commonly believed. This is one of my preferred remotes in smart TVs, so I am not going to complain. While the remote looks good and is well-built, the button spacing at the centre remains problematic. The buttons above and below the direction pad almost seamlessly merge into the D-pad, and you often end up pressing the wrong button when not looking at the remote.

While the remote looks good and is well-built, the button spacing at the centre remains problematic.

The remote has hotkeys for Netflix, Prime Video, Disney+ Hotstar, YouTube and Google Play along with navigation keys, am input key, volume control, mute button, settings and a D-pad. Most of the redundant keys that you see on several other remotes have been knocked off, but none of the important ones are missing. The power button on the remote communicates with the TV using IR when switching on, and then everything operates over Bluetooth. The remote is voice-enabled, so you can issue voice commands, and they work smoothly.

This Hisense TV runs official Android Pie 9.0 OS for TV and has a stock user interface that you see on most certified Android TVs without any third-party launcher. It is simple and easy to use even for a novice user. You have a row of your favourite installed apps, the shortcuts for which you can add, remove or shuffle around. Other rows display last played or suggested content from various online streaming services. The TV comes preloaded with Google Play Store and apps for Netflix and Amazon Prime Video.

Just like most Vu Android TVs, the Hisense 55A71F too allows you to change the sound and picture settings on the fly while viewing content from any source, be it Netflix or Prime Video or an HDMI source like DTH, or simply when watching something via USB. All you need to do is press the settings button on the remote to bring up the menu and make the necessary adjustments while the content plays in the background. You can have different picture and audio profiles for each input source, or apply your preferred settings or presets across the board. Speaking of picture presets, you get different sets while playing SDR, HDR10 and Dolby Vision content. You are allowed to tweak the picture further in each scenario.

The picture quality of this TV is quite good for the segment. The 4K panel can get fairly bright with good contrast, and details in dark areas in high-contrast scenes in our test videos were clearly visible most of the time. The black levels aren’t perfect, but par for the course in this price bracket. The colour reproduction of this TV is very good and the colours feel quite natural after a bit of adjustment. Out of the box, the colours feel a bit mellow, but bumping them up a bit in the picture settings brings them to life.

This TV supports HDR10 and Dolby Vision, and 4K HDR content encoded in that format looks vibrant. But with HDR-enabled content on Prime Video, there was a bit of flickering noticeable in certain areas of high-contrast scenes. Interestingly, a similar issue was observed when testing the Vu 55PM TV too, but the magnitude of the problem is lower here.

Non-HDR 4K content looks sharp on this TV too, with accurate colours and ample detail. 1080p Full HD content is upscaled well and looks equally good. Most 720p videos were perfectly watchable too, but understandably not as sharp. Anything lower than 720p looks a bit too soft, which is the case with almost every budget 55-inch 4K TV. The viewing angles are good, but not as good as in the case of IPS panels. There is a bit of colour shift when watching the TV from sharp angles.

As I touched upon earlier, you get a good amount of picture adjustment options like brightness, contrast, sharpness and colour to fine-tune it to your liking. In addition, you also get advanced options for adjusting white balance, colour temperature, digital and MPEG noise reduction and more. I didn’t spot any motion control settings here. The overall picture quality is marginally better than the Vu 55PM, and a notch higher than other competitors like Xiaomi’s Mi TV 4X 55 and TCL’s iFFALCON 55K31 that are priced around Rs 35,000. The only 55-inch TV in this price segment that does a little better in this department is the Vu Cinema TV 4K.

A pair of bottom firing speakers rated at 30 Watts RMS deliver some seriously good audio output. In fact, this is one of the best I have heard on LED TVs. It is comparable to that of the Vu Cinema TV with an integrated soundbar, though not better. But it is noticeably better than what the Vu 55PM could manage. The output is loud and clear with a good amount of warmth in the sound. The bass is punchy and there’s good clarity in the vocals too. The speakers are well tuned out of the box, but if you wish to tweak the audio further, you have a bunch of sound adjustment options too.

The speakers can get quite loud even at 20 percent volume level, and everything from music to movies to web-series on OTT platforms are surprisingly enjoyable on these TV speakers. What’s even better is that they support Dolby Atmos. That’s something I generally don’t take seriously on TV speakers, but it does make a difference on the Hisense 55A71F and you get more than a hint of positional audio. Though the sound is clearly better than what you get on most LED TVs, it isn’t as good as a soundbar with a dedicated subwoofer. But this is one of the rare TVs that did not make me miss a soundbar, and that’s saying something.

The TV takes about 40 seconds to boot up when you switch it on from the mains, which is average for Android TVs these days. I am still waiting for an Android TV that breaches the 30-second mark. This TV supports the instant resume feature, so if you switch it off and on from the remote, the TV comes back on almost immediately from standby mode. There was no noticeable stutter in the UI or during video playback all the way up to 4K HDR content. It also manages to play 4K videos through USB smoothly with the default player, or through a third party app like VLC.

While the company has ticked most of the crucial boxes, there is one major issue that I would like to point out. There is a noticeable amount of backlight bleeding along all four edges of the TV, as you can see in the image. Now this is something Hisense’s QC team should have taken care of before launch. I thought it might be a fault with our test unit, but I remembered noticing a similar issue in the Vu 55PM model too, which is more or less the same TV. Thankfully, it is noticeable mostly during loading screens or still images, and doesn’t impact the overall viewing experience during video playback. But it is something that could have been and should be avoided by the company.

The Hisense 55A71F UHD Smart TV can be purchased for Rs 34,990 in India with a one year warranty. They were offering 5 years of warranty on the panel at launch, so do check if the option is still available at the time of purchase. At that price, you get a good all-round TV with sharp picture and vibrant colours, support for Dolby Vision and Dolby Atmos, a wide array of connectivity options and excellent sound output.

It certainly has its nose ahead of the majority of its 55-inch competitors in the sub-40K segment from the likes of Xiaomi, TCL and most Vu models, barring their Cinema TV 4K, which is perpetually out of stock. So if you can look past the backlight issue, there is no reason not to buy the Hisense 55A71F if you are on a lookout for a feature-rich, large screen TV on a modest budget.