I’ll keep this short: Avoid the ExpertBook P2451F. It’s a superb laptop in all regards, except in the one that really matters: the display.

It’s slim, it’s light, it’s built like a tank. The keyboard is really nice (and it’s backlit), you get all the ports you could need in an office environment (including that VGA port for projectors), and its battery will easily get you through a workday. 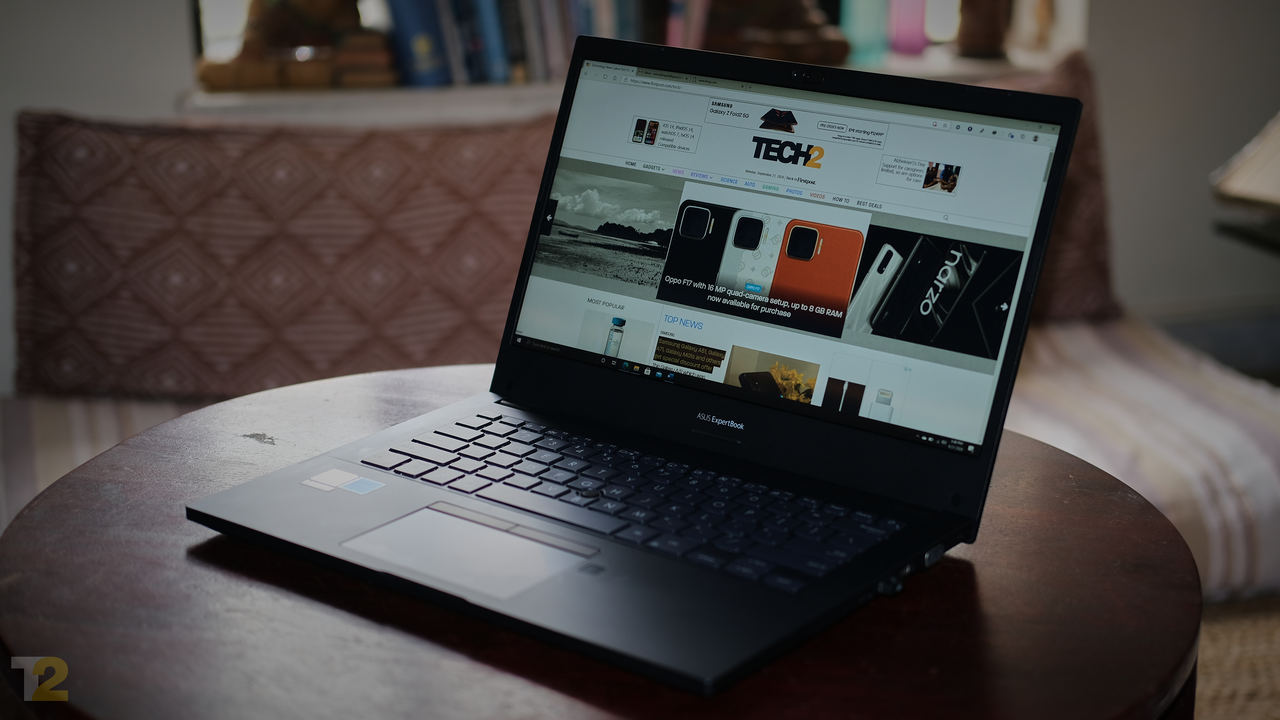 The ASUS ExpertBook P2451F is a rather handsome laptop, and it’s very well built. I wish ASUS had taken the trouble to use a good display, however. Image: Anirudh Regidi

I get it, this isn’t a so-called ‘creator’s laptop’, it’s not even meant for content consumption. This is a laptop that’s meant for busy little worker bees and students. For, you know, work, not play. Kudos to ASUS for enforcing that ethos with that display, but methinks they went a bit too far.

I’m fine with the display’s poor colour accuracy (only 46% sRGB), its average brightness level (~190 nits), and the nearly inaudible speakers. No, what really bothers me, and what will bother anyone who picks up this laptop, is that awful, awful contrast ratio of 70:1.

I haven’t seen a display this bad in at least 5 years. Image: Anirudh Regidi

This is literally 10 times worse than anything you’ll find on competing laptops from Lenovo, Xiaomi, and even Honor, and is a result of very high levels of backlight bleed.

Backlight bleed on the ExpertBook is ridiculous. There’s literally no angle from which the image appears clean and evenly lit. In this image, the top photograph shows the screen tilted at a slight downward angle. The bottom pic shows the screen at an angle you’d normally set your laptop at. The colour is off in both images. Image: Anirudh Regidi

The ExpertBook is the exception to that rule, and I can guarantee that there’s nothing in your house — unless you’re using an 8-year old laptop that you didn’t want to spend much money on — that suffers from as much backlight bleed as the ExpertBook P2451F.

Why is this a problem? I’m currently typing this review out in Microsoft Word and my Windows theme is set to a dark grey (which already looks like a dull grey because of the bleed). On this display, Word’s blue title bar is almost the same dark grey as my Windows theme. The edges are glowing, and because the display isn’t perfectly perpendicular to my face, the top half of the page is whitish while the bottom is a weird yellow-grey.

If I turn the laptop even slightly to the left or right, the edges get a dull grey glow. Everything that isn’t white has a halo around it.

In fact, I think I’m getting a headache just staring at this screen.

While this isn’t the very worst display I’ve seen on a laptop, and I do believe it’s fractionally better than some of the displays I’ve seen on enterprise laptops that companies buy en masse for their hapless staff, this easily ranks as among the very worst.

It’s a shame, really, because this is, screen aside, one of the best workhorse Ultrabooks I’ve used this year.

Specs are almost sensible and include an Intel Core i7-10710U CPU, 8 GB RAM (upgradeable), a fast 512 GB SSD, and an Nvidia MX110 GPU (I’m not sure what it does, because it’s only fractionally faster than the Intel integrated graphics). Included in the box is an HDD cage for installing a 2.5-inch HDD or SSD after the fact.

Performance is more than enough for the average worker bee, and at 8.5 hrs (in my testing) the battery will easily get you through a full workday. The laptop also doesn’t get too hot or noisy when under full load.

The SensePoint nub is a take on Lenovo’s famous TrackPoint. SensePoint works great, but my review unit suffers from slight drift issues. This can hopefully be fixed in a patch. Image: Anirudh Regidi

The keyboard is a joy to type on, and it’s backlit. The trackpad is meh, though. It does the job, but not particularly well.

If you miss the ThinkPad TrackPoint, ASUS has included a variant — called SensePoint — in this model, which I enjoyed using (though there were some drift issues that will, hopefully, be fixed via a driver update).

The speakers are fine, but not very loud.

The laptop is slim, and so thin and light for its size that I’d be happy to carry it around with me to whichever room I choose to wander into.

Port selection on this laptop is great. There’s even a full-size Ethernet jack. Image: Anirudh Regidi

The laptop is also solidly built, with no flex, even under the keyboard, and has a hinge that’s strong and doesn’t cause display wobble when typing. ASUS claims that the laptop is tested to ‘mil-std 810g’ durability standards, with all components being torture tested in especially harsh conditions to ensure that nothing will fail.

I’ve no idea why there’s a microSD card slot, or why one of these ports is rated at USB 2.0. Image: Anirudh Regidi

I don’t know why there’s a microSD card slot, but you get everything else, including USB-A, USB-C, Ethernet, HDMI, and even a VGA port. The webcam also has a physical privacy cover. Oh, and there’s WiFi 6 support thrown in.

As with most new laptops these days, the ExportBook’s webcam incorporates a privacy shutter. Image: Anirudh Regidi

Verdict: There’s potential here, but it’s yet to be fully realised

Priced from Rs 58,999 onwards, the ExpertBook P2 line is on the more expensive side. Judging by my review unit, it is an expertly crafted lineup of devices, and if it wasn’t for that display, it could have been exceptional. I don’t know why ASUS, after taking so much care with the design, chose to hobble it by scrimping on the display. I wish they hadn’t, because I love everything else about this laptop.

But they did, and that’s sad, and it’s also their loss. If you’re looking for a well-built workhorse that won’t break the bank, or your back, get the Mi Notebook 14, or any of Lenovo’s IdeaPads. They’ll perform just as well — the Mi Notebook line is, in fact, cheaper and more powerful — and while some may not be better built, they all have better displays.

If you’re looking for a premium device, check out Lenovo’s Yoga C640 – a beautifully crafted laptop with a 360-degree hinge and one of the best displays in its class.

The ExpertBook’s features and add-ons might appeal to the enterprise customer, but for you and me, there are simply too many excellent alternatives out there.