Sony ZV – 1 is a new compact that has a good chance of success on the market. On the one hand, it strongly focuses on video functions, and on the other, it is a slimmer and cheaper version of the RX100 models. I invite you to extensive first impressions.

The Sony ZV-1 has just premiered and I have been testing it for about two weeks. Sony promotes the new model as an offer for vloggers. There is a lot of reason for that, but I personally see in the ZV-1 a very interesting, cheaper alternative to the famous RX100 series. At the outset, I will reveal that I liked the new compact of Japanese, much more than the latest iterations of the RX100 series.

Sony ZV – 1 is based on components that we know well. 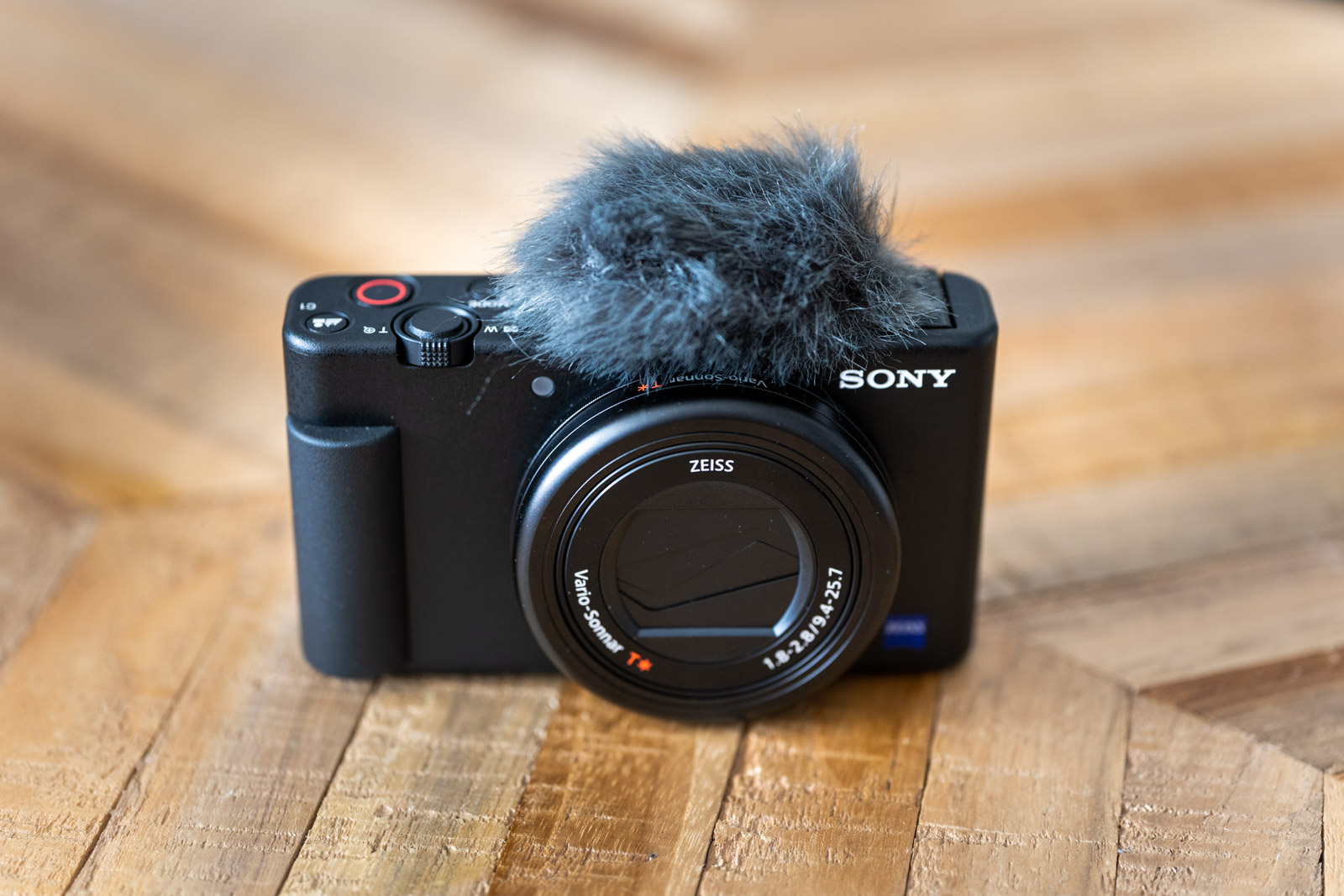 When we take Sony ZV-1 in our hand, we immediately see that it is a Japanese compact. The housing is small and light, but immediately brings associations with the RX100 series. However, there are a lot of differences here.

Let’s start from the inside, because it defines the class of the camera. The Sony ZV-1 is built around a single-inch Exmor RS CMOS sensor (with DRAM memory) with a resolution of 20 megapixels. The non-replaceable lens is a Zeiss Vario-Sonnar T * construction with an equivalent focal length of 24-70 mm and variable light f / 1.8 – 2.8. 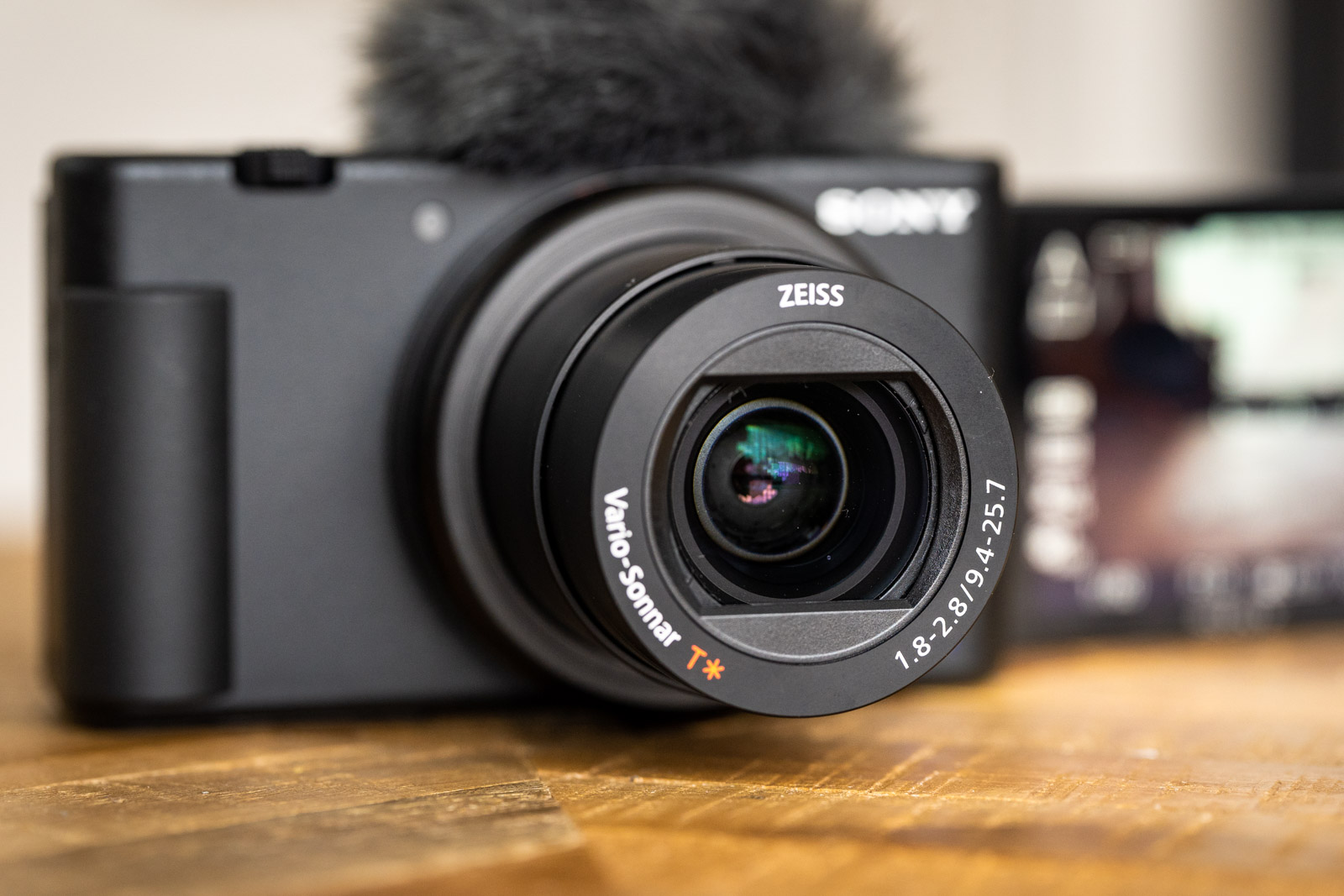 So these are components well known from the RX100 series. We have here the most modern matrix and lens, which we know from Sony RX100 models from versions III to V. Newer versions VI and VII have a new lens with a wider focal range, but at the same time with weaker light. In my opinion, this is a change for the worse, so with open arms I welcomed the old version of the 24-70 mm lens.

In addition, Sony ZV-1 has the latest autofocus with all the benefits of Sony, including live eye tracking. There is also a well-known NP-BX1 battery that does not bode long working hours.

Sony ZV – 1 is a new approach to the housing. It is familiar, but there are a lot of news. 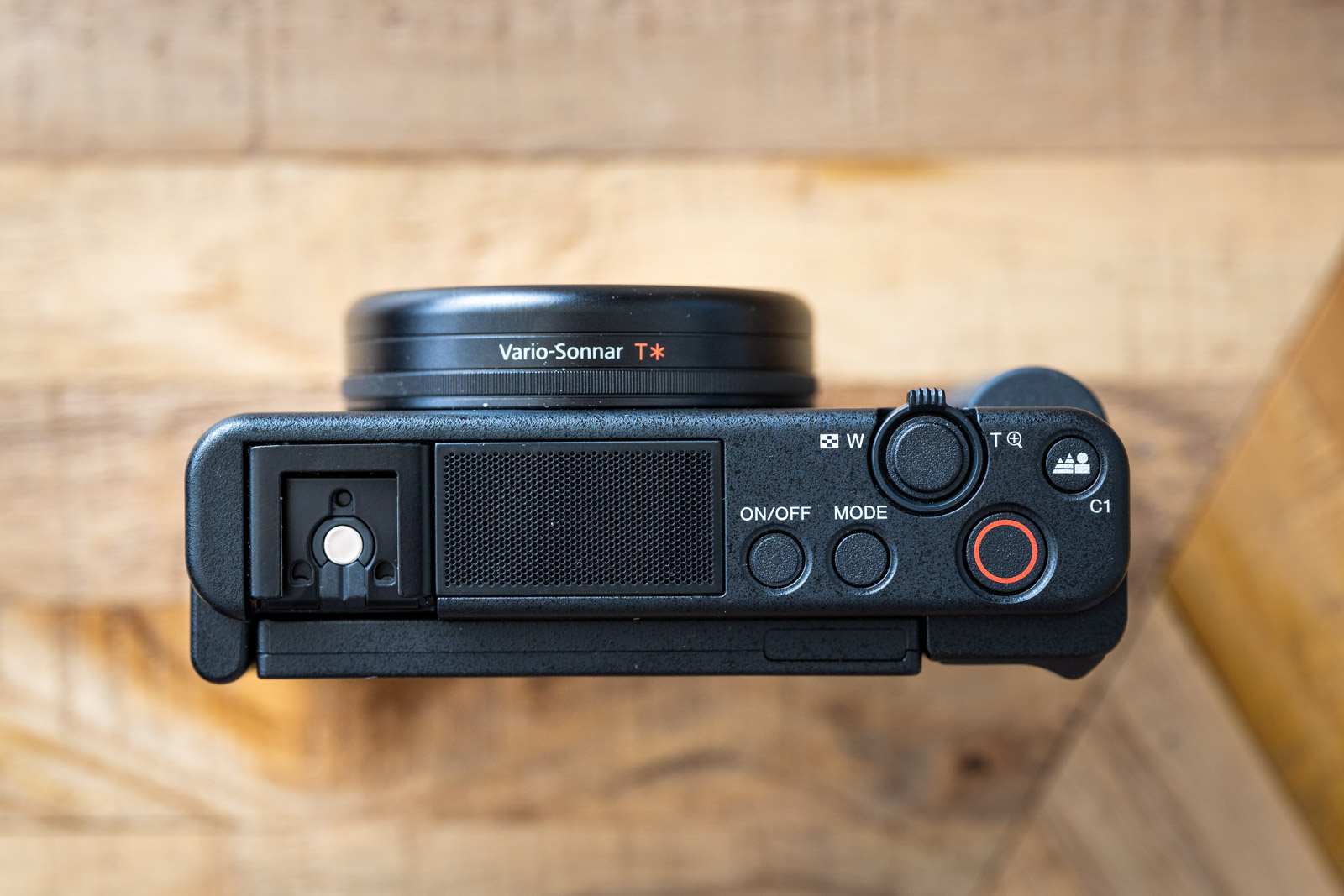 The housing of the new equipment at first glance is very similar to the RX100 series, but on closer inspection, it definitely differs from it. 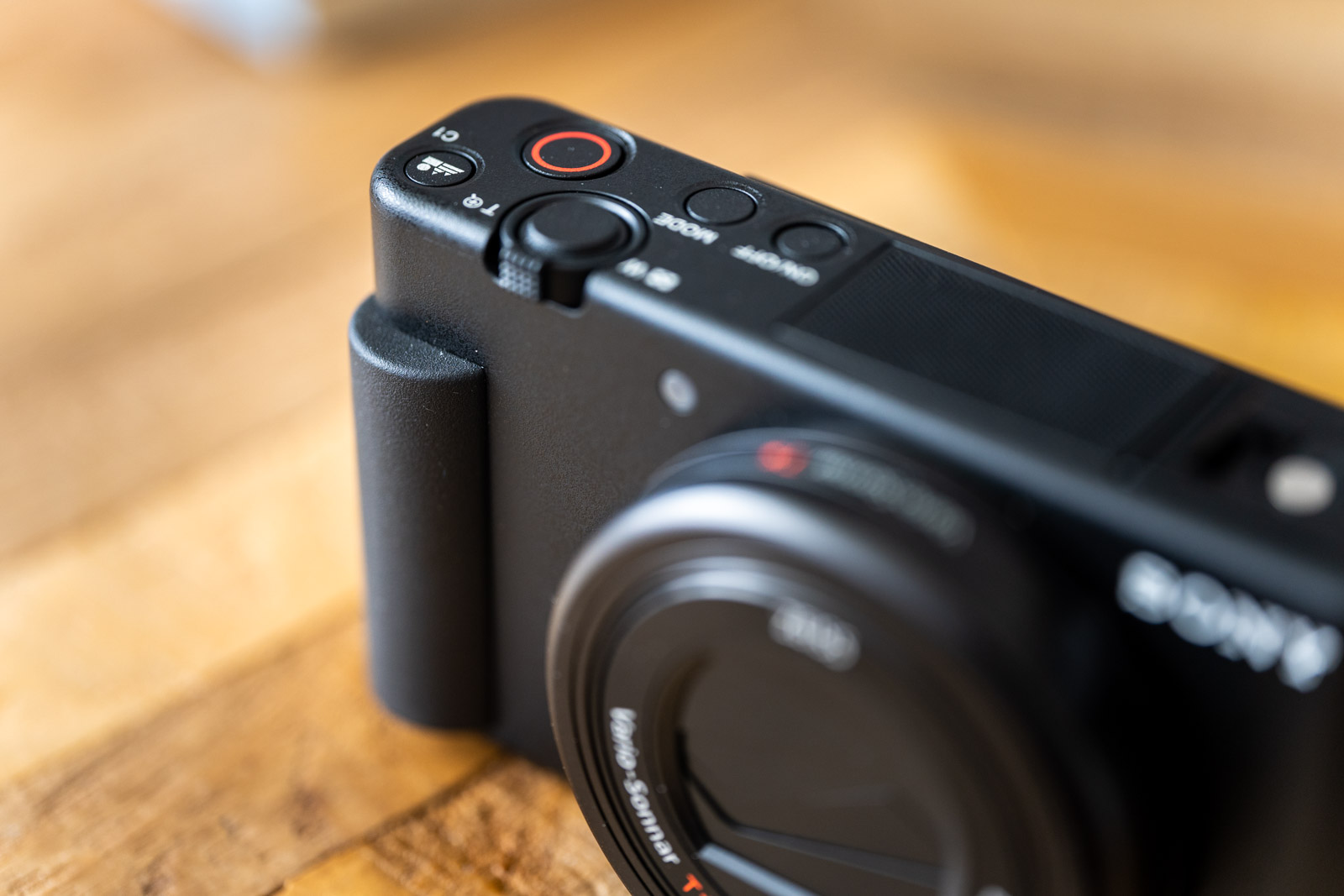 First of all, we have a small grip here, which significantly improves grip certainty. 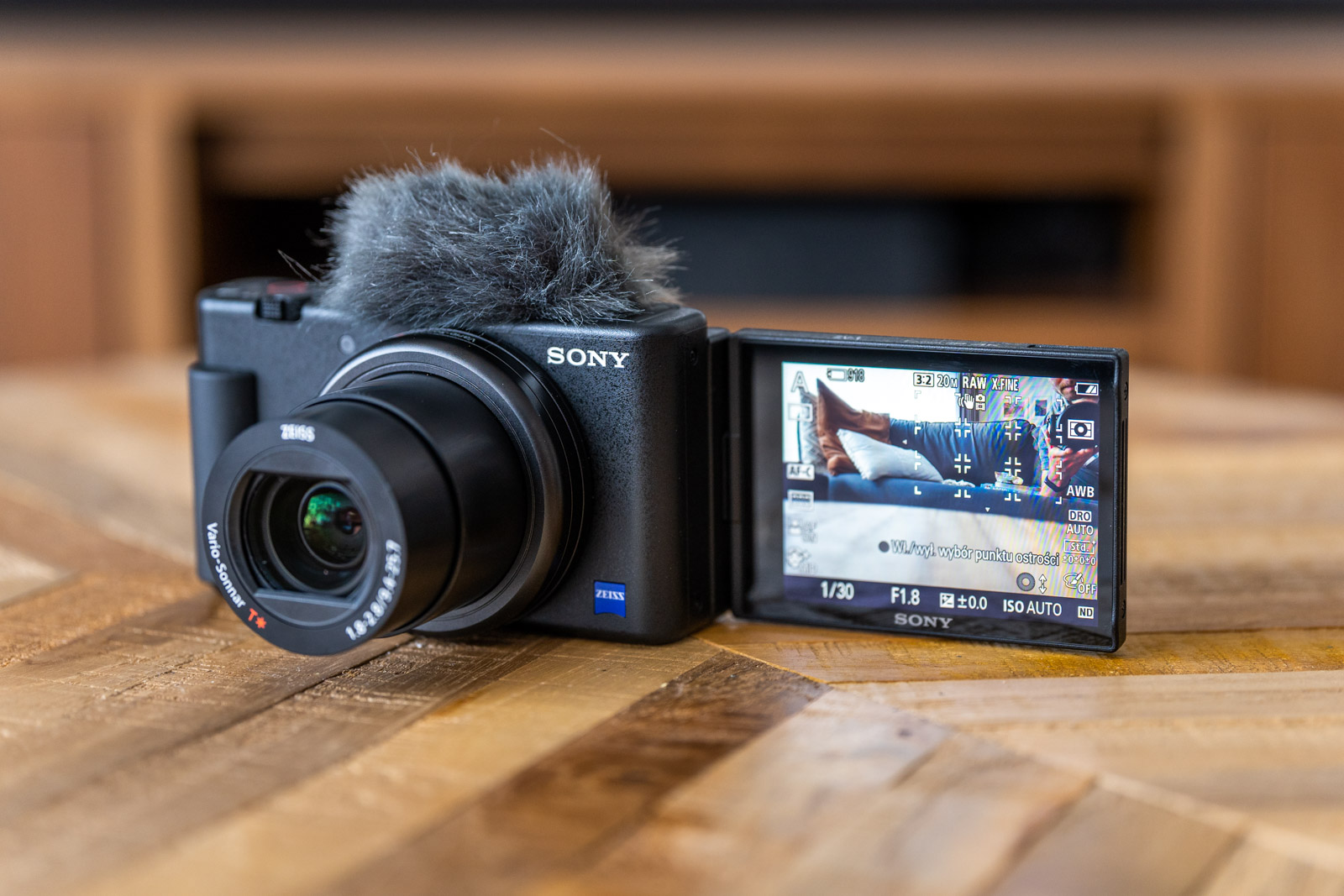 The second change I didn’t expect from Sony was the use of a tilted screen. This is a nod towards vloggers. The screen can be tilted 180 degrees to record or photograph yourself. This is a much better solution than the complicated hinge of the Sony RX100 VII. The Sony ZV-1 screen is touch-sensitive, but – as with Sony – to a limited extent. In the default setting, the tilt of the screen turns on the camera, which is a very convenient solution. 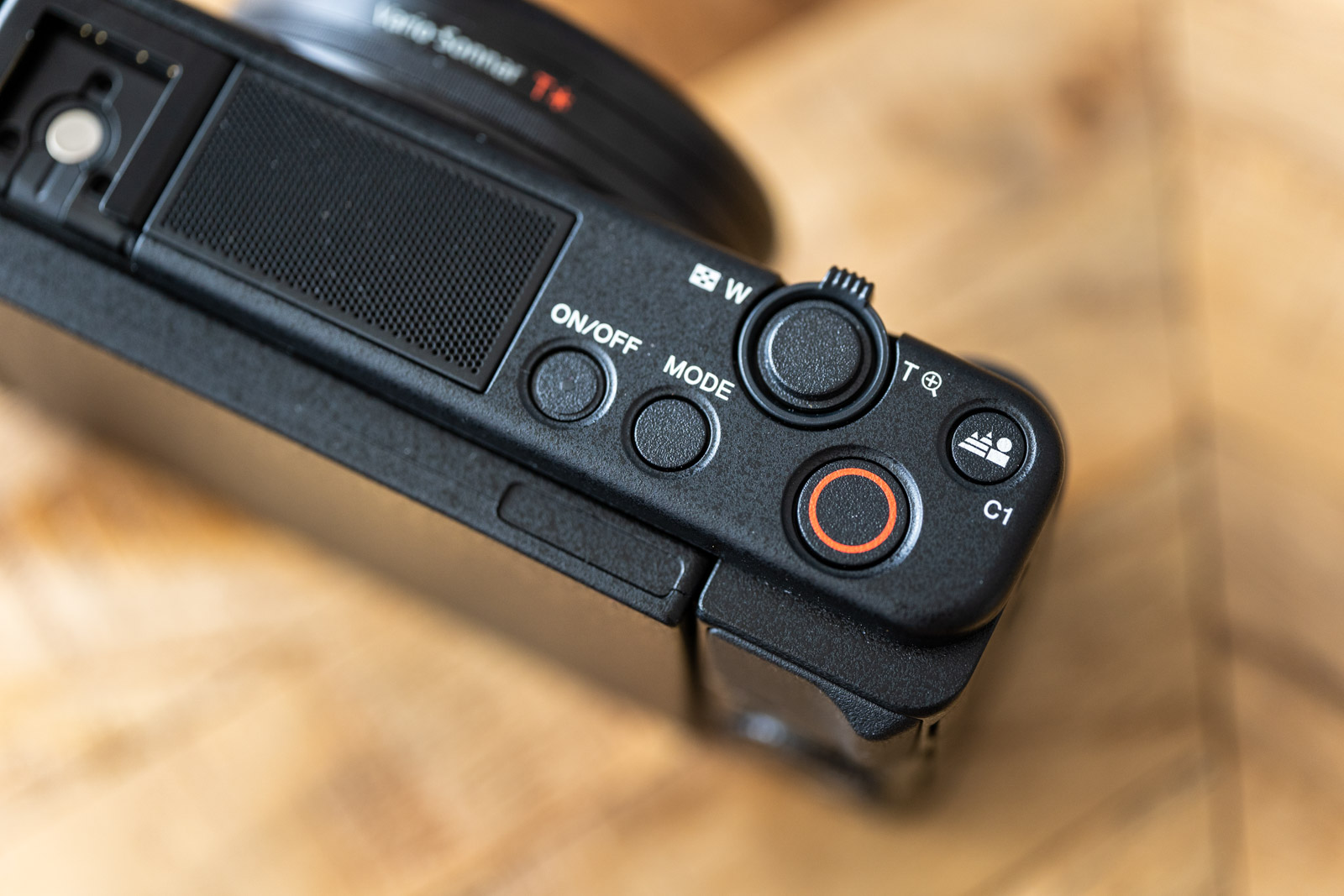 The housing also has a slightly different set of buttons than the RX100, with a strongly exposed record button.

The buttons on the back are tiny and can cause problems for people with thicker hands. 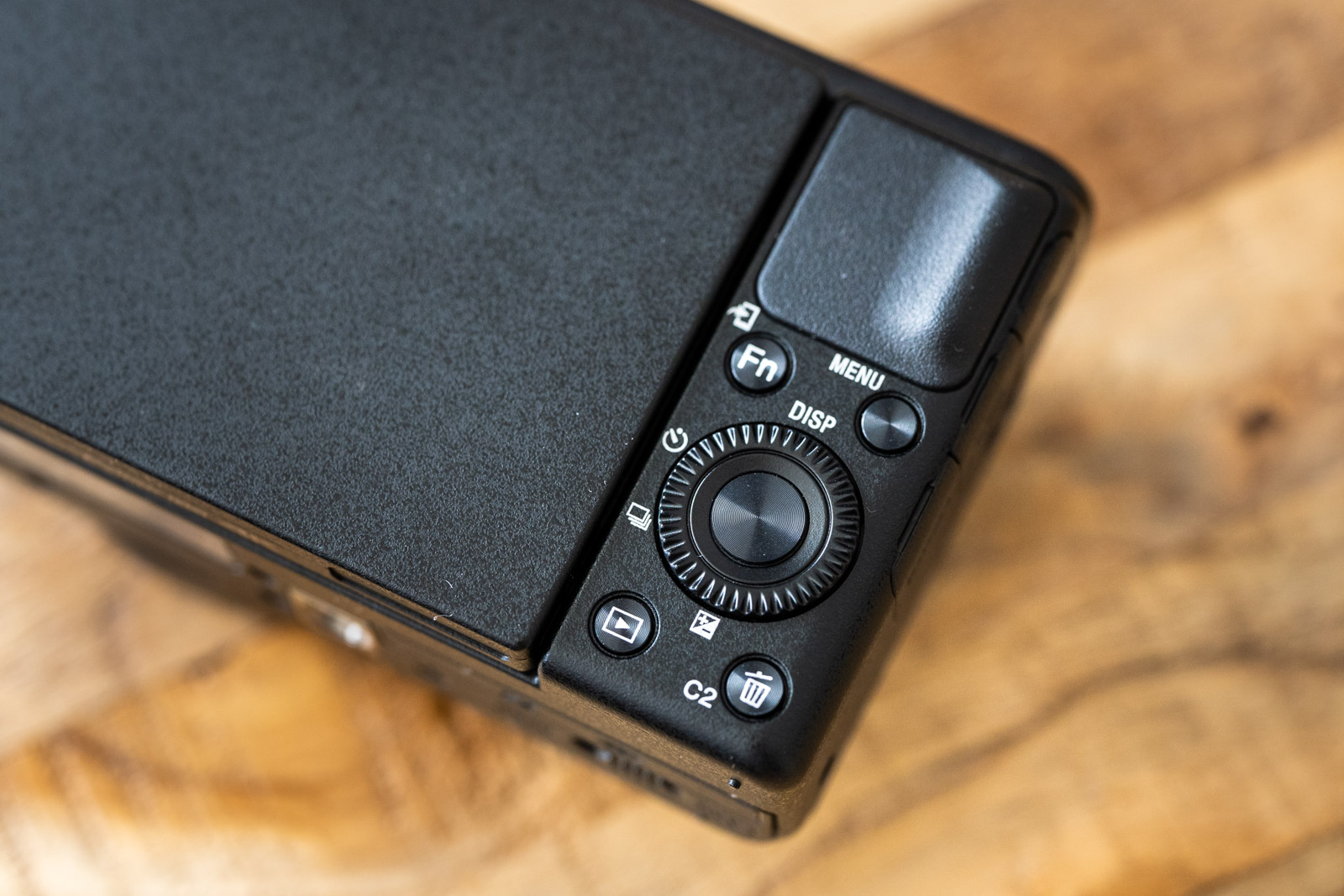 However, the Sony ZV-1 has several shortcomings compared to the new RX100 models. The first is the lack of a viewfinder. Personally, I do not miss the viewfinder in this class of camera, and it seems that the lack of this element has allowed to significantly reduce the price of the camera. So this is a compromise that is easy to come to terms with.

Sony ZV-1 does not bring a revolution in the menu, which means that we have a defeat here fertility. Features and settings is – as it is in Sony cameras – a whole shake, and the menu does not help finding the right item.

That is why configuration is important. Here, the function menu with 12 editable shortcuts comes in handy. For this we also have the My menu tab, to which you can add selected items. 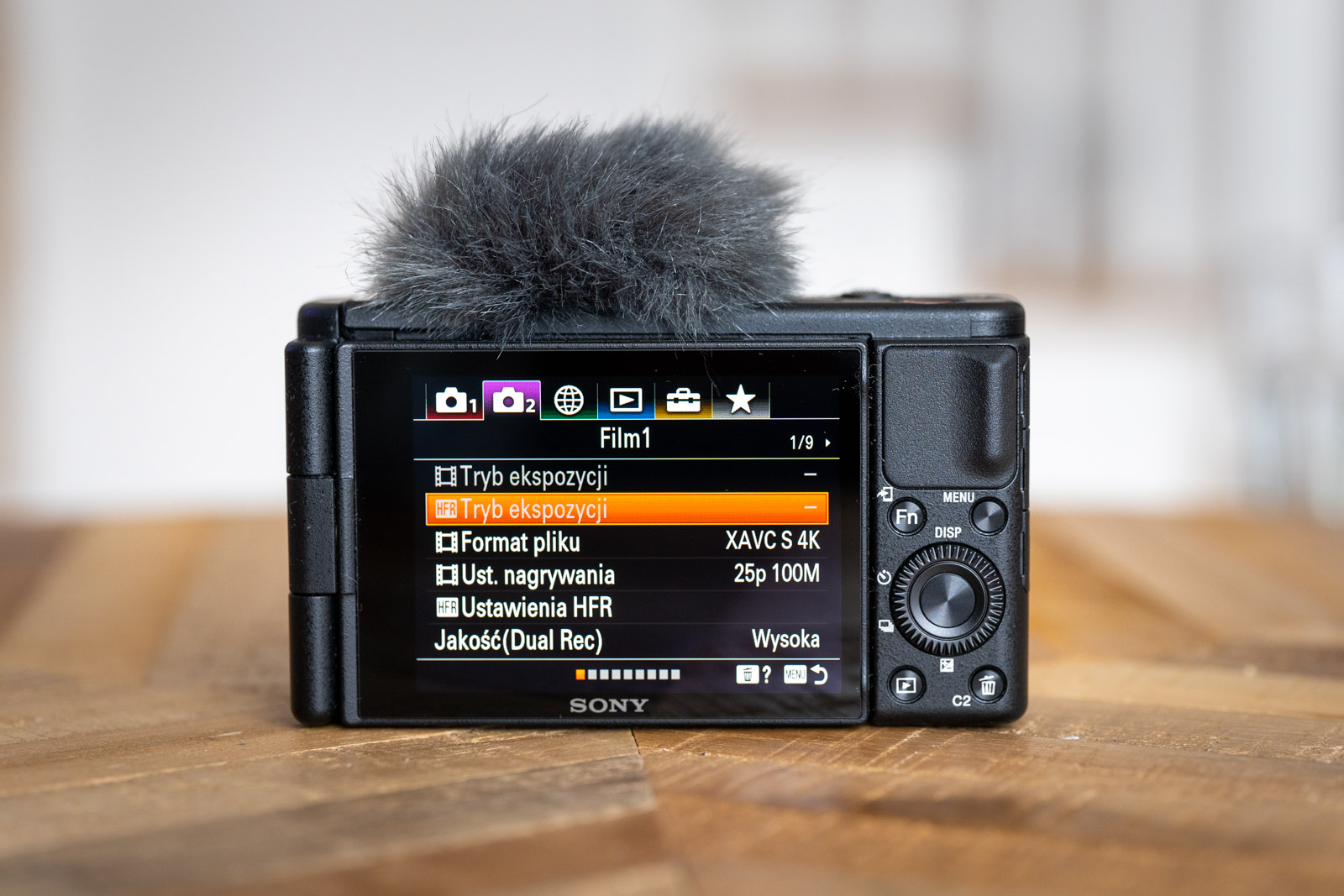 But most important will be the buttons. The housing has five configurable keys and only one setting ring.

The button simply switches the aperture from the maximum open position (f / 1.8 for wide angle) to the closed position (approx. F / 3.5 – 5.6, depending on the conditions and focal length). So it’s not digital blur. This is a nod to less advanced photographers, but this feature is useful even to people who know what they are doing. On the tiny body, manual aperture adjustment is sometimes not precise, and the button means that we can achieve the desired effect faster. 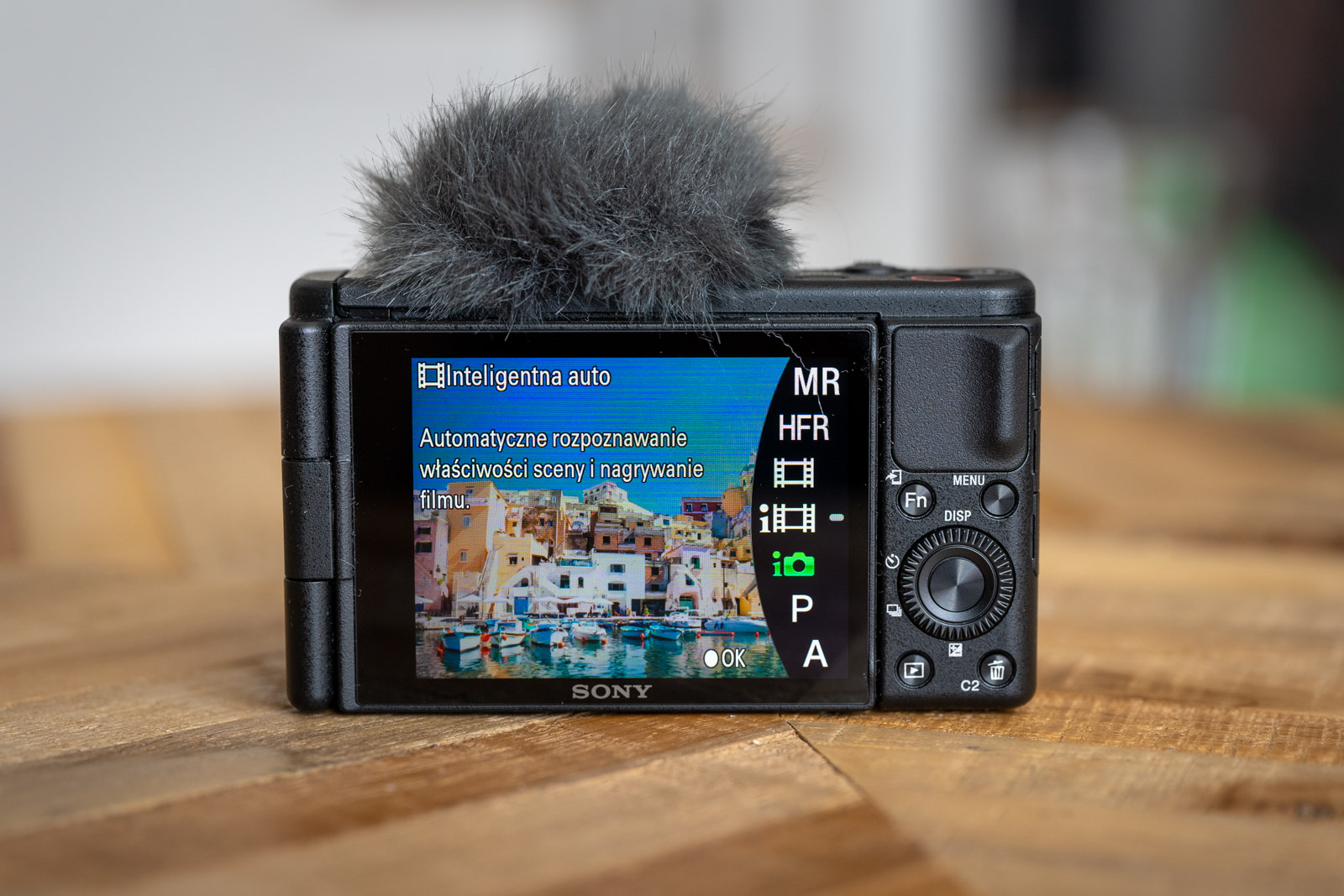 The second curiosity is the C2 button, which is responsible for controlling the autofocus. In the default mode, the camera focuses on detecting the face and eye, but it does it so effectively that even when the face is covered by something, the camera stays in focus. After pressing the C2 button, the autofocus switches to the “product presentation” mode, thanks to which focus is set in the foreground, e.g. on the subject shown to the lens.

You won’t be disappointed when it comes to photos.

If you know what the new RX100 series can do, you also know what to expect from the ZV-1. For a one-inch matrix, it’s very good. On the one hand, the camera plays in a completely different league than even the best smartphones, but on the other, for obvious reasons there is no approach to cameras with interchangeable optics.

It is simply an honest high-end compact with very good image quality. Of course, we have here the recording of RAW photos, as well as all semi-automatic modes and full manual mode.

In the video below you will find an example, short vlog recorded in 4K on full automation, using the built-in microphone. Without any video and audio processing.

For this we have Dual Rec recording (smaller preview video) and even proxy video recording (parallel capture of much smaller files for editing, while maintaining the parameters of the original files). For this we get the HFR mode with recording up to 1000 fps.

Sony also gives access to image profiles, including HLG, Cine or S-Log, so the image from ZV-1 can be easily integrated with material from larger cameras or camcorders.

In addition, the built-in microphone works very well, much better than in other compacts. 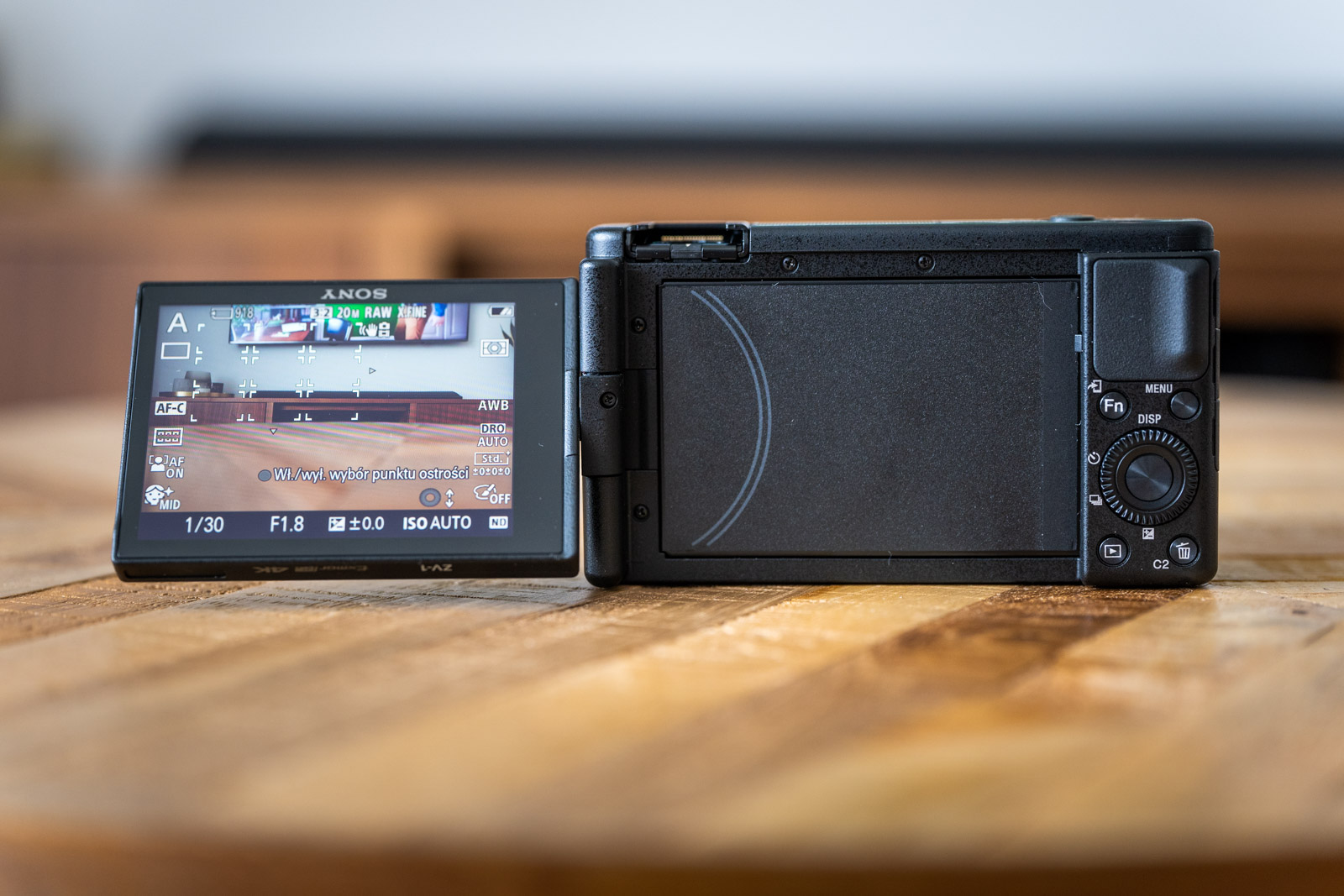 The kit comes with a special can (so-called deadcat) that can be plugged into the hot shoe socket to reduce wind noise. It is also possible to connect an external microphone via a 3.5 mm jack.

In the video mode we will find Steady Shot stabilization, which has two modes: standard and active. The latter is much more effective, the image floats very nicely when using it, but unfortunately in this mode the camera imposes a quite visible crop on the image. And if we’re at the crop, then in 4K mode the camera also uses 1080p crop, although here it is only symbolic.

In 4K mode, recording turns off after 5 minutes, but you can turn it on again immediately. In 1080p the limit of the recording length is the space on the card. In addition, Sony ZV-1 controls the heat level well. When recording at room temperature after about 30 minutes, it starts to display a prompt at a higher temperature, but this does not affect the work.

At standard settings, the equipment will turn off recording after approx. 40-45 minutes due to the heat level, but you can set a higher switch-off temperature, and then we will finish the work time with one battery.

The battery does not belong to the longest working cells. 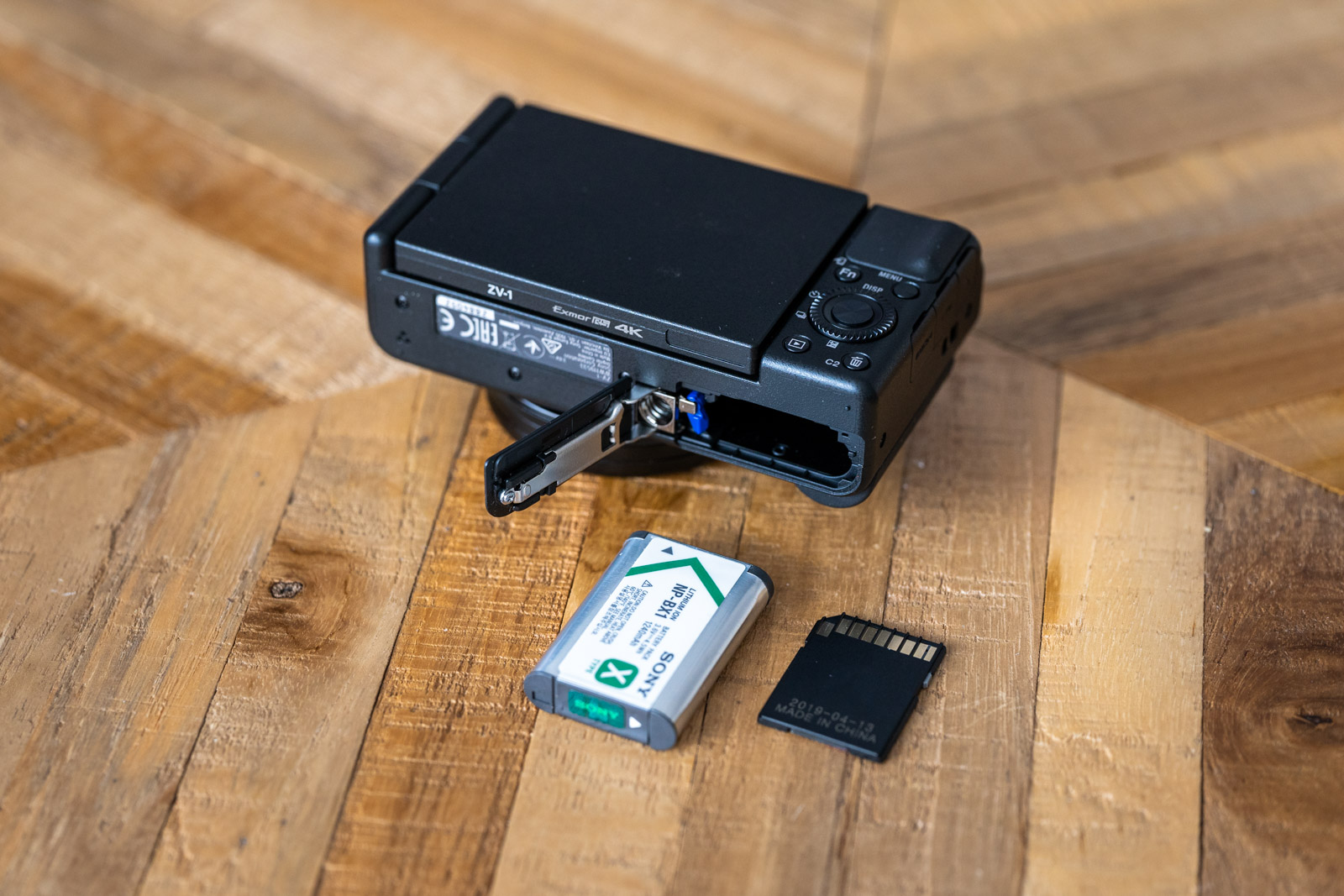 Unfortunately, Sony ZV – 1 is based on a very average NP-BX1 battery, which allows slightly over an hour of recording. So be prepared to buy some additional batteries.

The set does not include an external charger, and the camera is charged by connecting it to a power outlet.

Sony ZV – 1 is not a camera without flaws.

The small design always involves some compromises. And although I have the impression that there are much less of them in the ZV-1 than in the RX100 series, there are a few elements that irritate me. 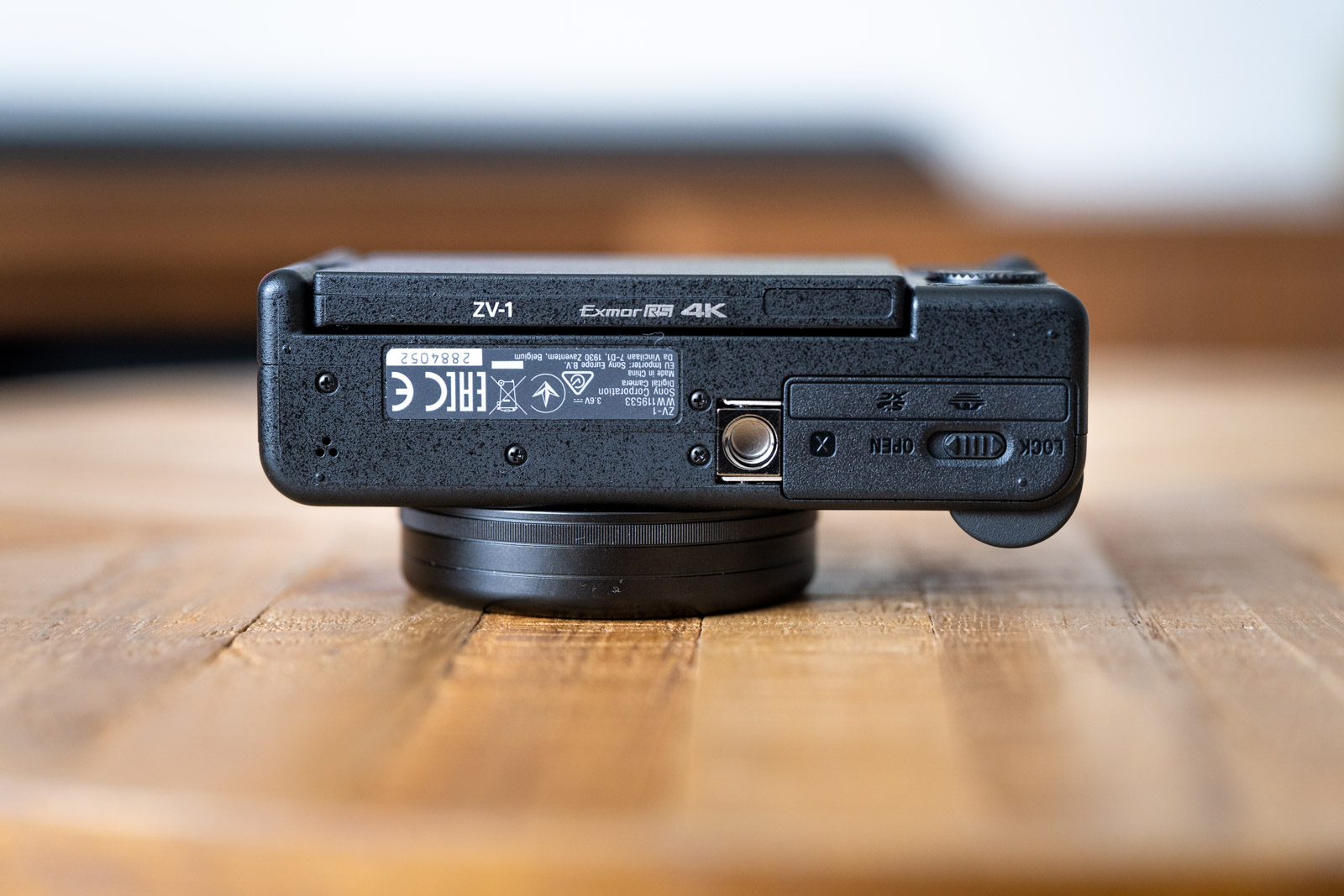 The first minor disadvantage is the location of the tripod thread. First of all, it is not in the axis of the lens, which can create problems when panning. Secondly, the thread is located right next to the battery and card door. This means that if we use a tripod, selfie stick or gimbal, any quick connector – even the smallest possible – will block us from getting to the battery and card.

The second major disadvantage is the inability to screw filters on the lens. In the camera for vloggers – and therefore set for filming – this is a big drawback. Especially if we want to maintain a cinematic look, which consists of a frame 25 frames per second and a shutter 1/50 s. On a sunny day you can not keep the time 1/50 s, even with a built-in digital ND filter. It could be useful to wind a physical filter. The third – this time small – drawback is the location of the camera switch. When we use the lens box included in the set, it covers the switch. Not only that we do not see the button, the diode also disappears informing, for example, that we are charging the camera.

And if we’re charging, has anyone at Sony really thought that in 2020 modern equipment should be charged with a micro USB socket? The USB-C standard has been in smartphones for several years, and it has already hit Sony cameras. Is present even in my Sony A7 III. I don’t understand why the new ZV-1 is based on archaic micro USB 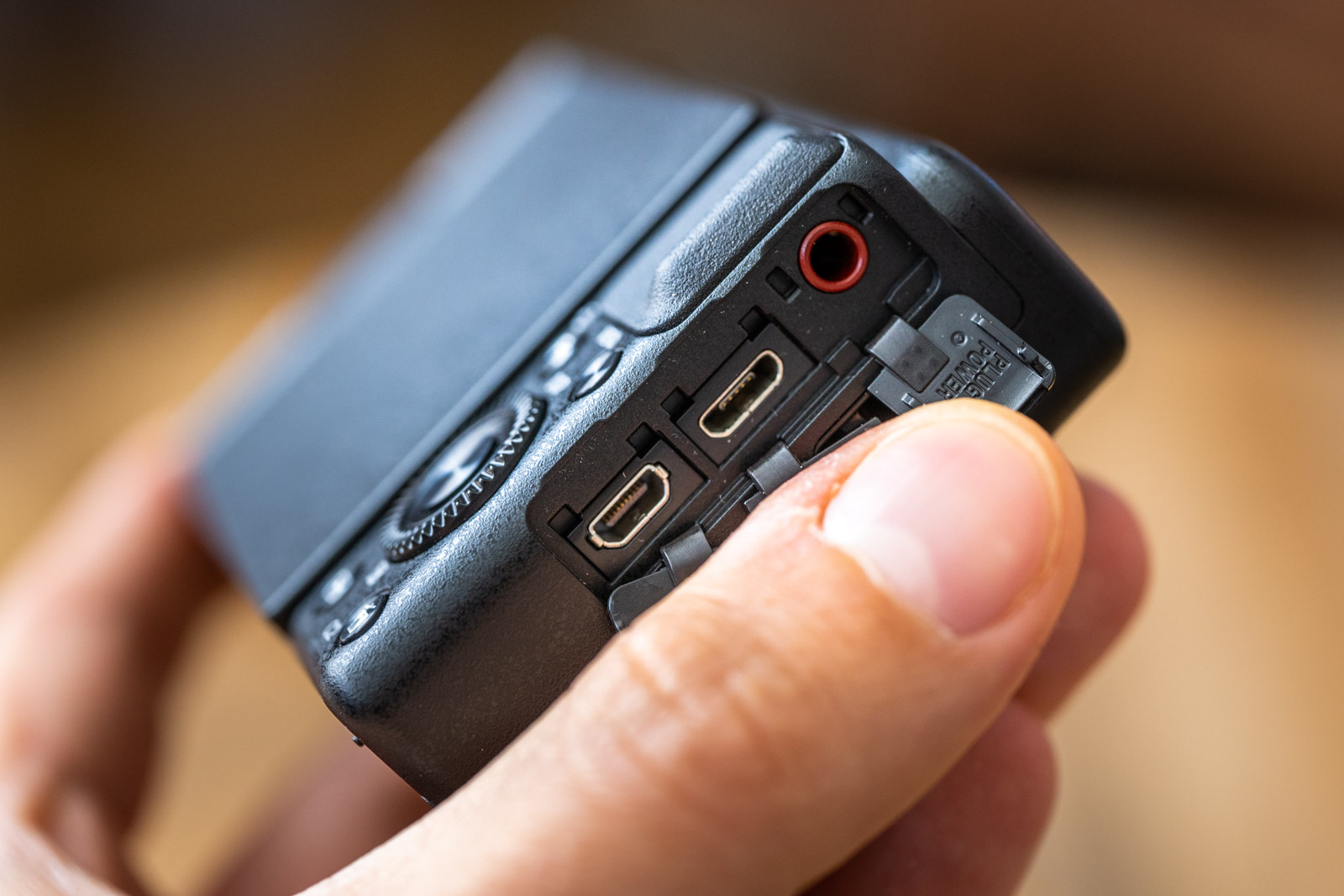 I add the last disadvantage a bit. I miss the wrist strap in the equipment box. Small strings are usually added to compacts, and the ZV-1 lacks this element for fully comfortable operation of the camera.

In summary, Sony ZV-1 is a camera that I would recommend to anyone.

On the one hand, this equipment is very friendly and easy to use, offering many simplifications and several simplifications compared to older RX100 series models. On the other hand, it is a full-fledged machine for the production of really nice 4K video, also taking high-quality RAW photos. 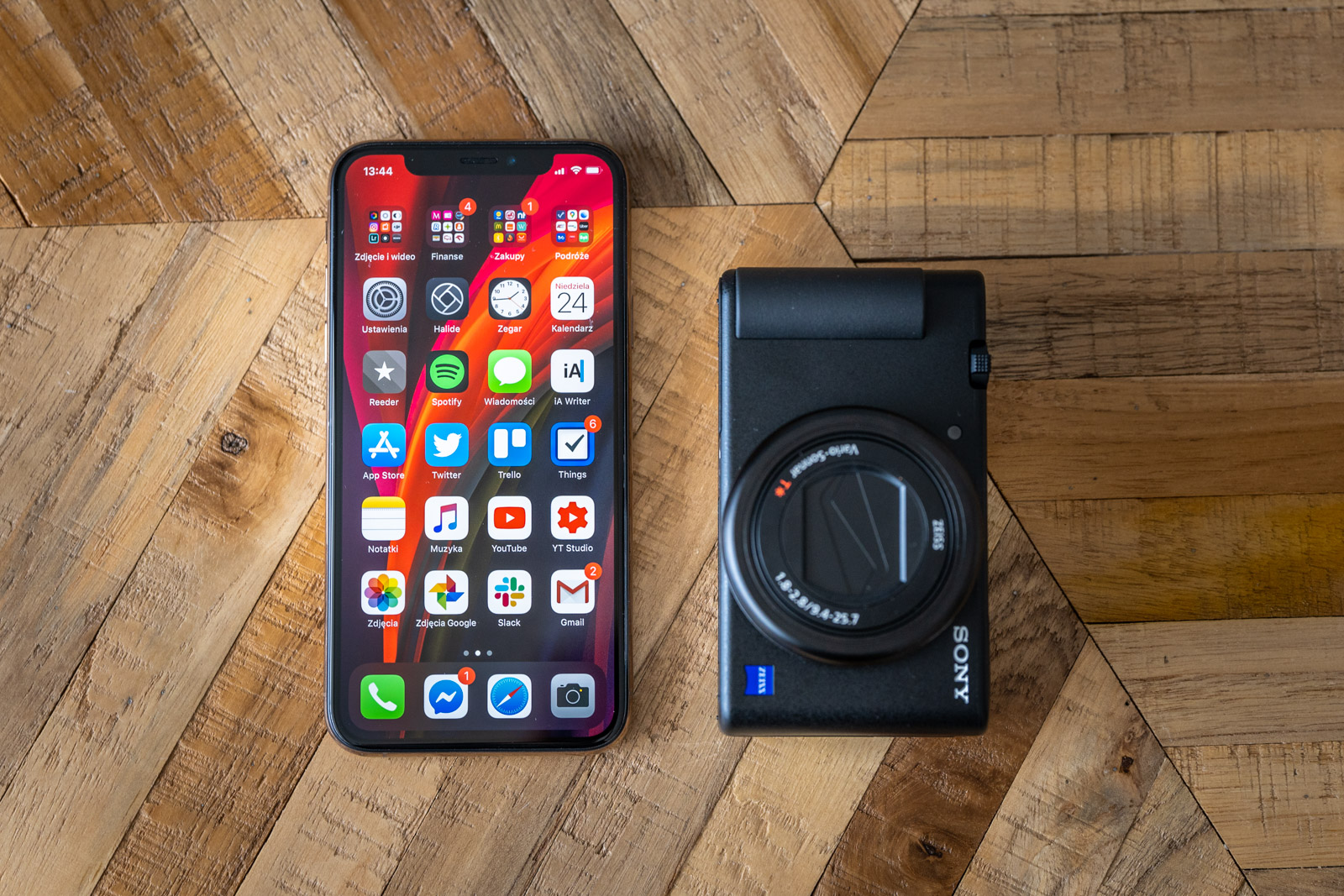 Such a camera is perfect as a family-travel compact for home applications, but at the same time in the hands of a talented photographer or filmmaker conjures up a very good quality picture. Although Sony focuses on video functions, there is also nothing missing in the ZV-1 photo.

Sure, there are a few shortcomings here, such as the lack of a thread for filters, or only 5 minutes of recording in 4K (after which you need to re-enable recording), but in such a baby these are compromises that are easy to turn a blind eye to.

All the more in the context of the price, which is to be 800 euros, or about 3500 PLN in Poland. This price at the time of release is very attractive, especially against the background of the latest RX100 models, which already exceeded the level of 5500 PLN. All this makes Sony I like the ZV-1 much more than the latest iterations of the RX100 compacts.

A new deal among compacts. Sony ZV – 1 is “cheap RX100” not only for vloggers